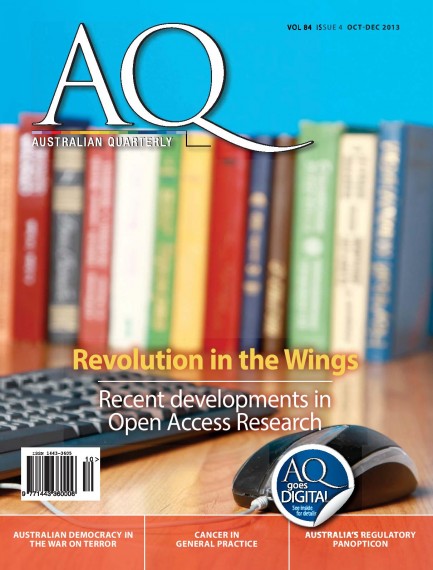 Science research advances because scientists, social scientists, researchers and scholars generally share their work, right? Standing on the shoulders of giants and all that? Well actually no. For about 200 years, the research literature has been largely restricted behind exclusionary pay-barriers, hindering everybody’s access to the scientific advances that will be the puzzle pieces in our future innovations. Here Emeritus Professor Arthur Sale dissects some of the most recent global developments in Open Access research. Like it or not, a change is coming.

Australian Democracy in the War on Terror

Over a decade has passed since the events of September 11, 2001. We all remember the frenzied period in its wake, the birth of The War on Terror, the rising fear and closed-border mentality following the Tampa issue. We now have the gift of hindsight, to look back at that turbulent time in Australian politics. Were we party to the politics of fear? Did we handle it well or ill? And were our parliamentarians really equipped to handle a crisis that changed the fabric of our democracy?

With Australia’s ever increasing cancer survival rates it is inevitable that cancer will make its mark on the careers of general practitioners, annually encountering around four new patients with diagnoses of potentially fatal cancers and having roughly sixteen patients diagnosed with cancer under their care at any one time. A GP’s multidimensional involvement in their patients’ health  places them in a unique position to make significant contributions to patients’ wellbeing throughout the cancer care journey.

In the 21st century the dominance of late free-market capitalism constructs its subjects not as citizens, but as consumers and investors. Australia began as a penal colony and still our corporate history smacks of a winner take all mentality. Yet there is a blind spot in the national imagination about regulating business despite the fact that behind daily two-party politics there’s a convoluted and complicated machinery of regulation does not always work to protect us.