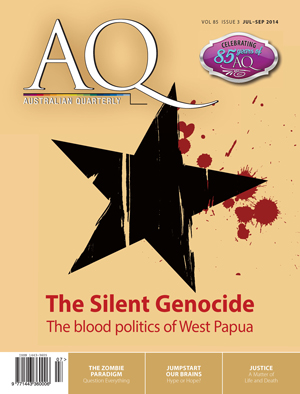 In 1961 the people of West Papua raised their new Morning Star flag and sang a national anthem, excited by the prospect of independence. The Indonesian response: to send in armed infiltrators and to assume a slow-moving genocide that has lasted 50 years. In December 2013 the West Papuans raised their flag once more, a protest against their oppression by the Indonesians and against the international indifference to their plight. Alison Bevage was on the ground at the flag raising and reveals the complicity of Australian politics in the murder of some of our most helpless neighbours.

The Zombie Paradigm – Question Everything

Many of the theories that underlie our present-day understanding of ecology were put forward in the 1960s and 1970s when people were still doing statistical analyses on computers that used punch cards. And many of the theories of this era remain potent today despite never having been subjected to proper large-scale scrutiny. What happens when the fundamental principles we rely on are wrong? And what must we do to stop these zombie paradigms from feeding on the minds of unsuspecting researchers?

Justice – A Matter of Life and Death

“While there’s life there’s hope” observed Theocritus, the Ancient Greek poet. It is difficult to imagine a more fundamental human right than the Right to Life.  But we have to recognise that life and death are two sides of the same coin.  There can be no life without death and no death without life.  The two are absolutely inseparable.  If life is a fundamental human right then death is too.

Jumpstart Our Brains – Hype or Hope?

The way in which people think about brain stimulation and cognition is largely negative, largely due to our historical concept of ‘electroshock’ Electroconvulsive Therapy. But new research has revealed a promising correlation between transcranial stimulation and increased cognitive ability – the opportunity to jumpstart ourselves smarter! But are the potential clinical applications likely to be eclipsed by a market greedy for self-improvement? And will the promising results of today foreshadow a future of ‘electrodoping’?